Vote by Mail, Ranked Choice, Instant Runoff, Advantages: Excepting that ballots would be sent and returned through the U.S. mail, Ranked Choice, Instant Runoff effectively implements a process similar to the process the U.S. House and U.S. Senate use in the selection of its leaders; it is used because it guarantees that no leader can be seated without the support of a majority of the caucus and because is the fairest, most inclusive, and democratic method Congress could devise.

Ranked Choice, Instant Runoff will cut the cost of holding an election in half by eliminating the need and expense of a primary election. Vote by Mail will reduce costs even further by eliminating the expense of election day polling stations. As it did in Washington, and Oregon, Vote by Mail will bring about a dramatic increase in voter participation, and thereby guide political control closer the center. The Ranked Choice, Instant Runoff effect will insure the election and representation by only those with the broadest segment of our political spectrum supporting them and thereby facilitate more bipartisan cooperation among elected officials. Candidates will no longer have incentive to pander to the Right in the primary only to move to the middle in the general. Conversely, those on the Right, and those on the Left would do their best to supplement their support from the middle. Middle candidates would seek votes from both ends. Moderation would prevail and the taboos of talking across the political isle would slowly vanish.

Alaska’s closed Republican primary will be eliminated. Right wing conservatives worked to close the Republican primary so they could be a relatively larger fish in a smaller pond. Wherever possible, they have succeeded in eliminating pro choice and/or moderate Republicans with any inclination to work with Democrats. In a state with more Republicans than Democrats, the closed primary nomination system simply works out to favor the election of right wing Tea Party candidates.

Coupling Vote by Mail, with Ranked Choice, Instant Runoff, will make it impossible to purge the voter rolls of minorities and poor people through photo ID requirements.

Adopting the ballot tracking and vote counting system used and perfected by the State’s of Washington, and Oregon, those vote counting issues raised by Diebold Election Systems, Inc., will become a footnote in Alaska’s history books.

Anchorage Tea Party Candidate Don Smith would never have been elected to the Anchorage School Board under Ranked Choice, Instant Runoff. One of his the two mainstream opponents would have won.

The runoff of the top two vote getters in the Egyptian election turned into a disaster for Egypt. –– Following a primary election in which the three mainstream candidates were eliminated sharing 52% of the vote while extremists at opposite ends of the Egyptian political spectrum were nominated to run against each other with 24% of the vote each. The outcome of Egypt’s top two runoff  system  left it mathematically impossible for Egypt’s voters to elect a president with the genuine support of a majority of Egypt’s voters. Had Egypt had a Ranked Choice, Instant Runoff system of voting, it is highly probable that one of the three mainstream candidates would have come out on top. Egypt’s new democracy collapsed in the wake of the election of a religious zealot determined to impose his religious convictions onto all of Egypt.

Many democrats were in a snit over Democrat Harry Crawford’s primary run against Democrat incumbent Betty Davis. Under Ranked Choice, Instant Runoff, it wouldn’t have been an issue. Anyone casting one vote for Crawford would likely have cast their other vote for Davis. In either case, the voting public would decide which of the two would have had the best shot at beating their Republican opponent Anna Fairclough.

Ballots mailed along with two pages of explanation for each issue in a Tabloid Sized Voter’s Guide would go a long ways toward better informing the voting public. Access to an inexpensive “Voter’s Tabloid” would have a leveling influence on the playing field between rich and poor, and between incumbents and non-incumbents. Today’s Voters Pamphlet is seldom taken to the polls for reference. With a Voter’s Tabloid next to an election ballot on the kitchen table, voters could familiarize themselves with candidates and issues they hadn’t heard of, they could pause to consult with friends, and they could make voting a family event. 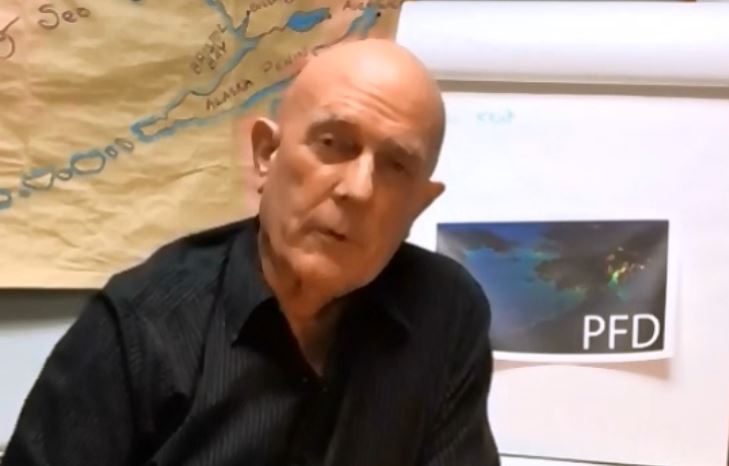 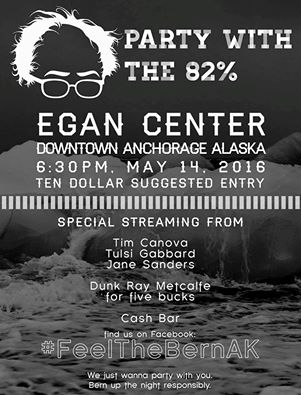 Dozens of corrupt elected officials and organizations across Alaska would love to get their hands on Alaska’s Permanent Fund and make it their own. It has been tried several times and it would mark the end of dividends to Alaskans if they ever succeed. Citizens for Ethical Government, Inc. is an organization that was formed to expose corruption of all kinds, with an emphasis on the most important issue facing Alaska. Protecting and building the Permanent Fund and the revenues that build it so it can survive long enough and get large enough to prevent the economic collapse that is surely to otherwise happen to Alaska if we  fail to protect it and prevent its theft until that time.

During my four years as a legislator, I was puzzled by the obsession with tax breaks for oil coming from Revenue Commissioner Tom Williams and a small number of state legislators. Given the huge profits we all knew BP, Arco, and Exxon were raking in from Alaska’s oil, their tax break rational seemed an irrational forfeiture of state revenues.

Unfortunate for Alaska, I was outnumbered and certain to lose whether I went with the program or not, and my South Anchorage District might lose badly needed appropriations for two new schools if I didn’t. Believing my legislative leaders to be honorable people with whom I simply disagreed, I gave in and went along with the passage of what was known as Elf or the Economic Limit Factor tax structure for oil taxes.

When I left the legislature, it became obvious that ELF amounted to a massive transfer of wealth from the Alaska State Treasury to BP, Arco, and Exxon. Later I observed Commissioner of Revenue Tom Williams become BP Exploration’s tax counsel and Chairman of the BP supported Alaska Oil & Gas Association’s Tax Committee. I observed Senate Finance Committee Chairman Ed Dankworth, who pushed ELF through the Senate, and Speaker of the House Joe Hays who pushed ELF through the House, both land fat multiyear lobbying contracts with Veco at $175,000 per year. When the FBI caught Pete Kott telling Veco owner Bill Allen what he wanted for pushing tax breaks for oil, Pete Kott wanted what he knew Joe Hays and Ed Dankworth had received before him.

Had it not been for Dankworth, Williams, and Hays, I believe our Permanent Fund would have swollen to well over $100 billion dollars by now. That’s about how large Alaska’s Permanent Fund would need to be to pay out annual dividends of $2,000 and have enough income left over to cover the state budget when the oil runs out. If we don’t get to the point at which Permanent Fund earnings can replace revenues from oil before the oil runs out, Alaska will replace Appalachia as the poorest reign of the U.S.

The oil companies want us to believe cutting taxes back to old levels will spur investment. However it didn’t spur investment then and there is no guarantee another Prudhoe Bay will be found if it does. The only guarantee we know we have is in the oil we know we have left. If we get what it is worth, deposit our excess revenues in the fund, and fend off those who try to raid it along the way, Alaska’s future will be secure.

From the Ashes of Veco Now Comes Paul Jenkins, Paul Laird and “Faces of ACES”

To Follow The Money From The Federal Treasury To Lisa Murkowski read below to see how common the practice is.

The example below has become the norm, not the exception.

How does a private citizen compete for elective office when his incumbent opponent can effectively access the federal treasury to finance his or her campaign? Is a democracy still a democracy if such an unfair advantage remains legal?

Citizens for ethical government wants to make this practice a felony for any person elected to any office, state or federal, from the state of Alaska.

By Mary Boyle – Rep. John Murtha (D-PA) has received considerable press over the years for adding so-called earmarks to defense spending bills that benefit large campaign contributors and send no-bid contracts back to his district in Pennsylvania, many of questionable value to the taxpayer.

A review of campaign finance reports, however, shows that the practice of inserting earmarks on behalf of campaign contributors is far more widespread on Rep. Murtha’s appropriations subcommittee alone.

The 18 members of the House Appropriations Subcommittee on Defense, which Rep. Murtha chairs, inserted more than $355 million in earmarks into the 2008 defense spending bill on behalf of their campaign contributors.

Those contributors, according to campaign disclosure reports, donated a total of $1.3 million to the members who sponsored the earmarks. Rep. Murtha inserted a total of $166.5 million worth of earmarks in last year’s defense appropriations bill, $73.6 million of which went to some of his biggest contributors.

The recipients of those earmarks donated a total of $313,150 to Rep. Murtha’s reelection campaign or his leadership PAC during the 2008 election. “Jack Murtha is the poster boy for pay-to-play politics,” said Bob Edgar, president of Common Cause, which has asked the House Ethics Committee to investigate Rep. Murtha and two of his colleagues, Rep. James Moran (D-VA) and Rep. Peter Visclosky (D-IN), on the defense appropriations panel for allegedly steering in exchange for hefty campaign contributions millions of dollars worth of earmarks to a now-defunct lobbying firm staffed by former Murtha aides. “But we must end the widespread practice of what appears to be trading earmarks for campaign cash. This game distorts our nation’s spending priorities and erodes public trust in our government.”

Read the four news articles below and the report that started the whole ball rolling:

(2) Ben’s Bribes in a NutShell (PDF). By Ray Metcalfe June 20, 2006
•Ben’s Bribes in a NutShell details how the recipients of Ted Stevens’ earmarks kicked nearly one million dollars back to Ted Stevens’ son threw an elaborate scheme of grants and bogus consulting fees.
•Ben Stevens was the President of the Alaska State Senate at the time. Had it not been for the information exposed by Ray Metcalfe, Steve Taufen, and Victor Smith explained in these articles, Ben Stevens would have probably succeeded his father in the U.S. Senate just like Lisa Murkowski succeeded hers. The only thing that would have changed would be the number of zeros on the kickbacks. 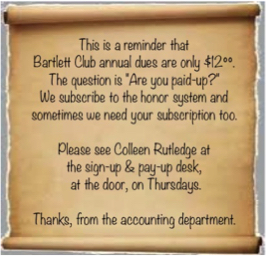